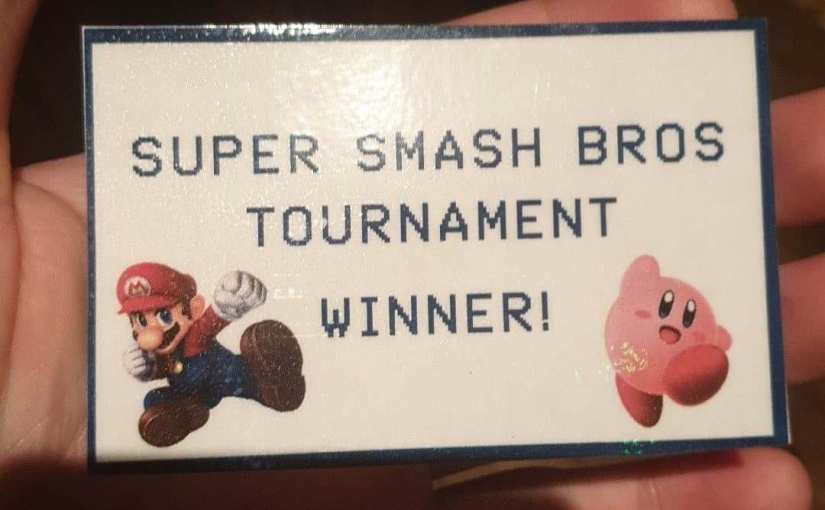 “Don’t worry, it doesn’t matter whether you win or lose, it’s just for fun!”

This is what I told an autistic boy at a gaming event we went to yesterday, where we entered a Super Smash Bros Ultimate tournament. Meanwhile, I was conjuring up a strategy to win the 4 player Free For All battle that was about to commence.

I was responsible for the boy while we were there and I made sure he was happy and enjoyed his time. However, during the 3 minute battle, I forgot about everything else that was happening, because I had to win, no matter what.

Fast forward to an hour ago. I have just had a huge meltdown after playing the exact same game. My brother beat me 4 out of 6 games, so I was very frustrated and I thought: ‘My brother is really, really good at the game, so I’ll just go and beat a noob online and I’ll feel better!”.

I lost my first game and started shouting and complaining that they are ‘cheaters’, ‘hackers’ and all the rest of the rubbish I say when I can’t admit someone is more skilled than me at the game.

I then lost another game.

Over the years I have learnt to stop throwing controllers and devices, so instead I let out a bellowing scream and violently contorted and jerked as if I was transforming into some form of grotesque monster. I then screamed at my brother to go away and hid under my bed covers for about 20 minutes.
That was over 2 hours ago now but I’m still on edge. I thought I would write this as I know a lot of other autistic people are sore losers too, and I wanted to try and explain what it feels like and why it happens.
Most people who know me would not expect me to act like this, as I am usually very calm and patient. But gaming is the one thing that often tips me over the edge. Though my worst reactions are saved for when I am at home, and I manage to keep it together when I am out and about most of the time.

Believe it or not, most of the time losing is actually a good thing. Every time you lose and look back at the reasons why, you have the opportunity to learn something new and will have ideas about how to improve next time. In this respect, losing can actually be better than winning, as if you win all the time you won’t have much of an idea about how to do better.

This doesn’t change the fact that the objective of a game is to win. The desire to win can be amplified by some common autistic traits:

There’s one more important reason why losing can be difficult for autistic people, and this is related to sensory regulation:

Above is part of a picture I drew to try and explain how meltdowns work to a parent, and I will give a brief explanation here of what a meltdown is and why they can happen often in autistic people:

Now apply this to losing a game.

As most autistic people tend to be anxious, they are close to meltdown already. The autistic person then doesn’t just experience ‘normal’ amounts of stress from losing, but it is amplified due to the ‘perfectionism’ and ‘anxiety and overthinking’ traits, meaning that losing just one game can easily send quite a lot of autistic people over the edge.

Autistic people also often struggle with self regulation, meaning that once they are in a heightened state, it is difficult to calm themselves again. Most people automatically self regulate, but autistic people learn how to do it through experience and practice. But when you are in a heightened state, you tend to forget this practice and it isn’t as useful as you would like it to be!

There are times when such huge negative reactions don’t happen. I want to explain the reasons for this below and also give some tips on how they could be avoided:

My final tip: GET GOOD AT WINNING 😉

You won’t have to get upset about losing if you are so good you never lose! 😉

As you can see from how today went for me, I am still learning to get better at losing, although I have got much better than I used to be overall. Feel free to share any tips or experiences you have had relating to this!

P.S. One thing I forgot to mention:

A lot of autistic people find real life really difficult to tolerate and use gaming as an escape. For some people, the online world is the only place they feel comfortable and feel like they can be themselves. Losing on online games and such will be more tolerable as autistic people are better understood and more comfortable in real life, as they will be less reliant on games!

Please let me know if any of this post needs clarifying, I wrote it very late and fairly quickly. It is now 00:23am so I am going to try and sleep!

9 thoughts on “Autism and Losing: Is there a solution?”